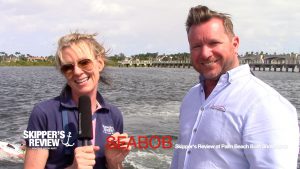 Have you ever wanted to hold onto a dolphin’s dorsal fin, feel that sensation of gliding through the water?  With the underwater jet ski,  Seabob, you can. Don’t ever say money can’t buy you joy, fun, momentary happiness, because i’m here to tell you..yep it can!!

SKIPPER’S REVIEW: Hey Sarah O’ Kelly here with Skipper’s Review TV at the Palm Beach International Boat Show 2019.  This is SEABOB.  I have the lovely representative of SEABOB here with me Mark Ray. He’s gonna give us a quick run down on what’s so special about SEABOB. Why would I want one, how fast does it go, where can you use them?

SEABOB: It’s all German manufacturing and engineering. Actually our U.S.A headquarters is based here in Fort Lauderdale Florida. We’ve been here in the U.S.A about six years. It’s an underwater diving scooter. It has so many applications whether you’re a diver, a free diver or you want to just do reef explorations or shipwrecks or just playing around on top of the water. They go anywhere from 8 to 14 miles an hour and they dive 130 feet.

SKIPPER’S REVIEW: What age group can use this?  Can children use it, do you have to be super strong to use it?

How old do you have to be to use a SEABOB?

SEABOB: There’s not a specific weight or age requirements. It really is just a matter of being strong enough to hold onto the SEABOB. The SEABOB’S range anywhere from 65 to 75 pounds depending on the model therefore typically someone needs to be of the body weight of the SEABOB. As far as operating, I do get very, very young operators some under 10 years old.

How hard is it to ride a Seabob?

They learn to ride them really quickly. It’s super intuitive. It really is just listening to your body. If you want to go left, it is a little shoulder roll and diving is no different. You just kind of push the SEABOB down and the operators start going down into the water. For parents of young operators or if you’re just trying to monitor yourself because of shallow water,  every SEABOB is built in with the ability to actually set your dive depth.  You can set in your power controls and you even have a timer you can set and program. It is throttle control so when you let go of the throttle on the right hand SEABOB will completely shut off. It’s positively buoyant so it will stay right there for you.  Very, very, very safe very easy to use and a lot of fun.

SKIPPER’S REVIEW:   What about the cost what do one of these babies costs?

SEABOB: Our base model starts around $9,400 the mid-tier model would be $12,900 and then a high-end model $17,500. Once you pick your model, then it’s like buying a car. I always joke, it’s like you pick your model and then you pick your features and colors you want? We have some that are built in with a camera. So it has a forward facing camera and a rear facing camera and it just works off an app on your phone. To operate the camera,  you just touch one button and it starts video-taping, recording the experience. The minute you get back on Wi-Fi it’s right there on the app on your phone. So you have it all ready to go and you can edit it the way you want.

SKIPPER’S REVIEW: That does seem a little high. What is in it that makes it so expensive?

SEABOB: It’s the electronics that really are the most costly portion of it. The technology, the engineering, the electronics. There’s really nothing in its class that can dive at the lengths that it does and go the speeds that it does. There’s no service, it causes no harm to the environment because it is electric. We’re really very fortunate, we’re in a class by ourselves and it’s just great German technology and engineering that you’re paying for.

SKIPPER’S REVIEW: How long do you have to charge it and after you charge it how much of a use do you get on a full charge?

How long does the Seabob take to charge?

SEABOB: Yep,  so depending on the model you have different battery sizes. All the models come stocked with a standard charger so if the battery is completely dead it’s an overnight charge. It’ll take eight hours to get into a 100%. We do sell a quick charger that will charge a completely dead battery in 90 mins for a full charge. That is an aftermarket sale.  As far as actual battery life, it’s like anything else it’s really depending upon how you’re using it.

How long will the SEABOB hold charge?

We base it on full throttle percentages. You’ll get anywhere from an hour to maybe an hour and 20 minutes at full throttle depending upon the model. If  you’re on one of the higher-end models with the larger battery and you’re outplaying at the sandbars or on and off the yachts, you will get three hours, two and a half, three and a half hours on it. Depends on your speed.

SKIPPER’S REVIEW: I can’t imagine you’d last much longer than an hour constantly going on one of these anyway. Is it strenuous, do you have to be physically fit?

SEABOB: No.  I think a lot of times people think it’s gonna be like a jet ski, you’re holding on and almost fighting it. So no, like I said it’s just pulling. It’s very fluid, very flowy. When people get off of it for the first time they always say,  oh my god I feel like a mermaid, I felt like a dolphin. It’s very much that feeling and that’s what makes it so easy for younger operators to use. We do make a pilot belt system that tethers to the SEABOB itself where you actually sit into it. If you do have a younger operator it does help keep them tethered to the unit and take some of the pressure off the arms. Really there’s not a lot of strain on the muscles and using it.

SKIPPER’S REVIEW: All right, well thank you so much Mark. 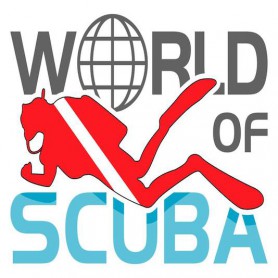 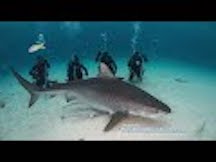